During winter when you park your car or boat for several months before using them again, you unknowingly increase the chances of your engine being destroyed. This is precisely why fuel stabilizers exist. This article will help you decide on the best stabilizer in the market so that the fuel in your engine does not cause damage when it evaporates and oxidizes in your fuel tank.

Before we compare the different stabilizers available on the market, we have prepared some frequently asked questions and their answers so you can have a better understanding of what a fuel stabilizer is and what it does.  We will also answer important questions about where to buy them and their importance.

1. What Is a Fuel Stabilizer?

A fuel stabilizer is a special kind of liquid that keeps your tank fresh so that your engine easily starts.

Stabilizers ensure that your fuel is clean and they protect your engine from destructive substances that may form. This way, the efficiency of your engine is maintained and the fuel in it burns as it should.

All the fuel stabilizers on our list can be bought from Amazon.

5. Benefits of a Fuel Stabilizer?

There are several benefits that one can get from using a fuel stabilizer. Apart from the main benefit, which is preventing oxidation, stabilizers also increase the efficiency of your engine. One important benefit is seen from the fact that some brands may improve your fuel economy by over 5%, and it results in your engine starting faster. Depending on the brand used, you can store fuel for around 3 years using a stabilizer, and you do not have to drain the fuel to store it. Using a fuel stabilizer subjects you to other unexpected advantages, such as cleaning your carburetor and fuel injectors.

The products on our top 10 stabilizer list were reviewed based on parameters such as their features, pros, cons and where to buy them. We know that the market has many fuel stabilizers that all claim to be effective. This is why we invested our time and effort to give you this unbiased best-of list. The products on our top 10 best-of list were also evaluated based on their efficiency in the market, and popularity. We are therefore satisfied that they have met our required standards.

Sentry makes it to the list of our top ten best stabilizers because of its reputable name where marine equipment is concerned. It incorporates an SD formula that works by stabilizing the fuel in your engine while at the same time eliminating water that decreases its efficiency. A 32-ounce bottle can treat around 80 gallons of fuel. Other features include a capacity to not only clean the engine but also the fuel injectors, and it inhibits ethanol phase separation. The product boosts the power of your engine and reduces smoke problems associated with it.

This boat fuel stabilizer is able to treat 512 gallons of fuel with only 32 ounces. It is manufactured in such a way that it can treat both 2- and 4-stroke engines. Compared to Sentry, this fuel stabilizer is cheaper per gallon. Unlike other stabilizers in the market, this one boasts contains no alcohol in its formulation. Though this makes it less efficient when compared to other stabilizers, it does not dissolve salt, and this reduces any problems that may arise in your system. If you are searching for the best alcohol-free fuel stabilizer, then this is it. 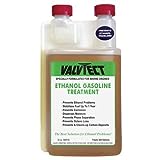 ValvTect is a stabilizer that is specially formulated for marine engines. The product is packaged in a unique bottle design that has two bottle tops instead of one. Its special formulation enables it to stabilize fuel for around 12 months while preventing corrosion in the engine. Its efficiency is seen from the fact that this fuel stabilizer works by dispersing moisture and preventing phase separation and octane loss in the engine.

This stabilizer has an impressive packaging design that has two bottle tops instead of one. It has a long rate of use as it can stabilize stored gasoline for over a year and a half. Another feature includes its ability to remove deposits that may reduce the performance of your engine and inhibit corrosion. One unique feature of this stabilizer is that it adds lubricity to your system, and this creates an overall effect of reducing the wear and tear of fuel system compartments.

Unlike the packaging design used by other fuel stabilizers, this one comes with an impressive bottle design that is classic and easy to carry. This stabilizer keeps fuel good for up to one year. Other features include a capability to not only lubricate but to maintain carburetors and injectors. It is suitable for 2 and 4 carburetted gasoline engines that are fuel injected.

Briggs and Stratton is an affordable stabilizer when compared to the Sentry stabilizer. However, it has one shortcoming, and that is the fact that only 80 gallons of fuel can be treated with this stabilizer per 16 ounces. It is specifically made with small boat owners in mind who have small engine capacities. One great thing about this stabilizer is that it solves your ethanol problem due to its triple anti-oxidant property. It also does this because it has corrosion inhibitors in its formulation. It has impressive stabilizing properties and can stabilize fuel for over three years.

The Sta-Bil 360 Marine Fuel Stabilizer comes in an impressive packaging design with two bottlenecks on it. It is a 5-in-1 formula as it can perform several functions such as cleaning the fuel system, preventing ethanol damage, maximizing the fuel economy by removing water, and increasing engine power. Unlike other stabilizers, this stabilizer is designed for boat owners to service their engines. It prevents corrosion in the engine system thanks to the vapor technology used to make this stabilizer. 5 gallons of fuel can be treated with only 1 ounce of Sta-Bill.

9. Yamalube Fuel Stabilizer and Conditioner Plus 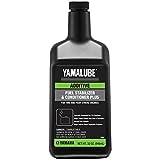 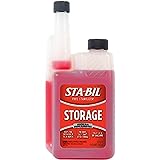 This product comes with an impressive packaging with two bottle lids instead of one. The bottle is attractive with a sleek design. This fuel stabilizer is suitable for if you intend to keep your engine inactive for at least 12 months. It protects your engine from varnishes and gum. One unique feature of this stabilizer is that it treats many gasoline products.

All our top 10 fuel stabilizers are the best to buy. However, the best one for you is the stabilizer that solves your individual needs. If you are experiencing ethanol problems, then the Sta-Bil 360 Marine Stabilizer is best for you. Alternatively, if you want to store your fuel for over 12 months, then the Briggs & Stratton stabilizer is best as you can store fuel effectively for around 3 years.