Even Boats Can Get a Hydrolocked Engine Hydrolocked engines are no fun, whether in a car or a boat.

In two old episodes of the U.K. television show Top Gear, former hosts Jeremy Clarkson, Richard Hammond, and James May made amphibious vehicles that could drive on land and (attempt to) also work on water.

Clarkson was the most successful in creating a working “Toybota” – made with a Toyota Hilux pick-up truck and an outboard motor. Still, after successfully crossing a reservoir, the engine got swamped, the car/boat flipped, and Clarkson and Hammond ended up in the drink. With excess water in the engine, the Toybota could not recover.

James May’s car-turned-sailboat made it back onto land after a “boring” sail. Hammond’s boat sank entirely.

In his second amphibious car attempt, Clarkson modified a Nissan D21 pick-up and called it “Nissank.” This car/boat made it across the English Channel to France. James May and Richard Hammond did not fare so well. Even boats that get too much water in the engine can develop hydrolock like cars in floods.

How Hydrolocking Happens in Cars and Boats

You don’t have to have an amphibious vehicle to be in danger of hydrolocking. It can happen with automobiles and motorboats. Forget about combustion bending or other odd things happening…when water is in your engine, it can be a big problem. 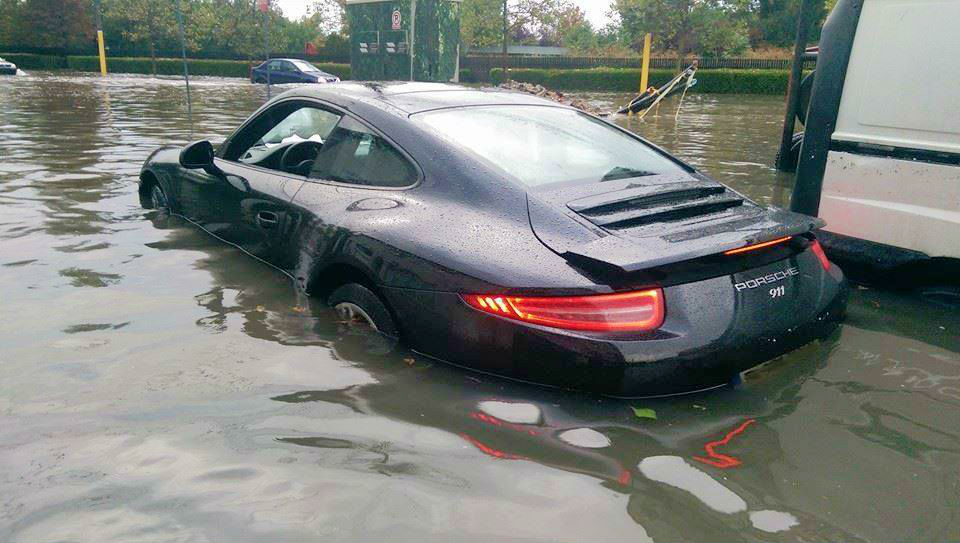 If you have had a car in a flood, you perhaps found the engine seized. In automobiles, flooding is generally what causes hydrolocking. This often happens when water rises above the air intake valve.

Trucks that are designed to drive through high water will usually have a special air intake valve fitted to the top of the car like a snorkel. This keeps water out of the engine.

Yes, boats are supposed to be in water, and boat engines should function in water-filled environments. Yet, boat engines can still become hydrolocked.

This is most common with smaller marine crafts. Outboard motors can become swamped with too much water and hydrolock. Personal Water Crafts (PWCs) such as Jet Skis and WaveRunners can also become hydrolocked.

Hydrolock can also occur in other types of boats. One very common reason is when the boat captain keeps trying to turn the engine when it won’t start. This can cause cooling water to flow back into the engine.

What to Do If Your Engine Hydrolocks While You Are Boating

Ideally, you will not have to deal with hydrolock while out on your boat. Here are some tips to deal with boat engine hydrolocking.

1. Prevent Hydrolock Before It Happens

Proper engine maintenance can go a long way to keeping your engine running smoothly. Remember, as well, to not crank the engine too much if it has a problem starting.

2. Get Safety Training Before You Go Out on the Water

Before you get behind the wheel (or rudder) of a boat, make sure you have been properly trained. You might find local boat safety courses offered by the Coast Guard or other maritime organizations.

3. Make Sure You Have a Working Radio on Board

You should also have a charged cellphone with you.

4. Get Back to Shore If You Can

5. Anchor If You Can’t Move on Your Own Power

Drop anchor (assuming you are in a safe place) and assess your situation.

Hopefully, your radio or cellphone is working. If not, you will have to flag down other boats passing by. As this can take time, it is a good idea to have some food, water, and blankets on board.

The best way to avoid being stranded out on the high seas is to make sure your boat engine is regularly maintained. Boats that are hard to start may indicate an engine that needs a rehaul. Take care of your engine first so it takes care of you.