Boat Anchor Brands that You Can Avail Online The market for boat anchors can be confusing, which is why our team of experts is excited to share with you ten of the best ones available today. We'd also like to equip you with some valuable information beyond these suggestions to help you make the best choice for your next boat anchor when it comes time to make that big purchase. That's why we've included a history of anchors, a review of the different types of anchors, and information on which boat anchors work best in different terrain. At the end, we'll deliver our top recommendations, so you know which anchors are the very best available right now.

1. What Is the History of Anchors?

Back in the day, boats were small enough that they stayed near the shoreline without an anchor. It was only when mankind began to explore further offshore that the anchor was born. The first anchors date back to around 3300 to 1200 B.C.E., and they were basically just rocks tied to ropes that got cut loose when fishermen were done with them. The Greeks experimented with baskets of rocks, sacks of sand, and lead-filled wooden logs, but major advancement wouldn't come until the 19th century.

The renovated boat anchor model was given the familiar curved arms we know today by a British naval clerk, and this upgrade was so successful that the design has stayed relatively similar up to the present day. However, the 20th century did provide a lot of upgrades. It developed lots of new models, like smaller patterns for smaller boats and larger patterns for off-shore oil rigs.

The German Buegelanker model is a triangular anchor with one fluke and a roll bar to ensure it catches properly. A Frenchman by the name of Alain Poiraud took this design and made the fluke concave, which is the shape we know today for small boat anchors.

2. How Can I Choose the Right Boat Anchor for My Needs?

First off, there's a very good chance you'll end up needing more than one anchor to get the job done. That's because different anchors work best in different terrain.

If you are around sandy or muddy areas, you'll want a fluke anchor. These are the most common types of anchors. If you're over rocky or grassy ground, you'll want a plow and scoop model that has flat, plow-like structures at the end of it to help it snag something. Keep in mind that bigger is usually better when shopping for anchors. If you're torn between two models, choose the heavier of the two. It's important to have both styles of anchors because you can't always be sure what type of terrain you'll find yourself in.

You always want to stay safe and avoid drifting off if your engine ceases to work. It's easier for search and rescue teams to find you if you stay in one place.

When your boat is in the water, there are constant horizontal ocean currents pulling at it. The anchor needs to combat these forces by using weight and friction. The weight is obviously being pulled down by the heaviness of the anchor, but what most people don't know is that the friction necessary is actually being generated by the chain rather than the anchor.

The weight of the chain fights against those horizontal currents (the more chain you have, the more resistance you'll have). It's important to let a bit of chain reach the bottom as a taut line could pull the anchor free. The chain will provide the friction necessary to help keep that anchor in the place it needs to be. 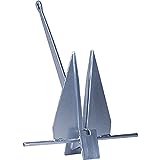 This is an excellent boat anchor choice for smaller boats (or a secondary choice for larger ones) because this model is lighter and is easy to stow away flat for boats with limited storage. Its holding power to weight ratio is stellar, and it will hold fast to mud or sand. This anchor is made from steel and has a hot-dipped galvanized coating that withstands wear and tear well. It weighs 9 pounds and is great for boats that are about 27 feet long. It includes a shank for deep penetration into the mud or sand, and two sharp flukes.

If you are dealing with a racing current and you need an anchor that will perform well no matter your terrain or elements, the Marine #7 Slip Ring model is a perfectly decent option for you. Its drop-forged shackles will dig into mud, debris, and even stone after just a little bit of drag with a good current going. It weighs 9.7 pounds, and the price is affordable for such a sturdy, galvanized anchor chain. 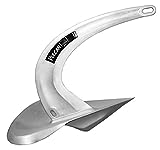 This anchor proudly resists bending with its 73 pound frame, making it perfect for any terrain and great for larger vessels. It comes equipped with a roll-palm for self-righting action so you won't have to worry about it overturning in a strong current. It has a carefully designed shank profile and offers stellar compatibility that provides a secure fit for many boats, including powerboats. It's made of a high-tensile steel construction that offers resistance and is incredibly easy to use.

This boat anchor features broad blades that will attach easily and hold on to both mud and sand in lakes and rivers. For this reason, it's a very popular choice among those who enjoy boating on fresh water. It features a smooth vinyl coating and is easy to release for added ease of use. It's great for freshwater vessels of all sizes as it weighs a substantial but manageable twelve pounds. 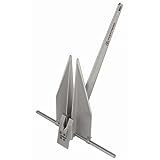 With an attractive, traditional design, this boat anchor has a long shank and two sharp flukes. It's made from a high-strength aluminum alloy rather than steel, making it a lightweight choice that is easier to reel back in but offers the same holding power as a steel anchor weighing twice as much. It requires minimal space for storage as it can lie flat, and it's a great primary choice for those who want a lightweight option for their small vessels. It's also an ideal secondary choice for larger vessels. It weighs just over four pounds and is suitable for boats from 16 to 27 feet long.

This heavy-duty boat anchor is ideal for rough weather conditions, as it will hold fast to all types of seabeds and won't let you down during periods of extreme wind. There is a roll bar that ensure the boat sits at the correct angle to distribute weight evenly. There are even different slots in the design for different seabeds. There is an extra-sharp tip and the forward section is reinforced to handle more wear and tear. This anchor comes in different sizes, ranging from 10 to 80 pounds, so you can be sure you're getting the size you need.

This boat anchor comes along with a 3.5 pound grapnel equipped with four dedicated shanks that are great for rock and coral terrains. It comes with a padded nylon storage bag that protects both the anchor and the marker buoy (which is included in the purchase). Also included is 25 feet of polyethylene rope and the 4.2 pound anchor itself. This anchor is the perfect choice for smaller vessels, such as jet skis and canoes.

This single-fluke boat anchor is one of the most popular choices for larger boats over 21 feet long. It provides excellent holding power and is great for almost all terrains. It is crafted from manganese steel and is galvanized with zinc for rust protection. You can get this anchor in 14, 22, or 35 pounds, and you will be impressed with how easily and reliably this anchor sets on the first try. It will even hold up in stormy weather! It's guaranteed for life against breakage and absolutely worth the high price tag.

This boat anchor boasts a three-prong design that allows it to dig into terrains such as mud, sand, grass, rock, and coral. This makes it an amazing choice for travelers who will encounter all kinds of terrains. You can get this anchor anywhere from 4.4 to 44 pounds, and it's made from an impressive, high-grade galvanized steel. It's designed to stow easily on the bow roller of your boat for ease of use. 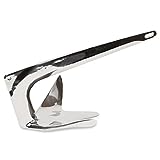 Great for bottom conditions consisting of mud, sand, and rock, this anchor will be sure to never let you down by setting easily and remaining stable no matter your current terrain. It will keep you steady through all 360 degrees of boat movement. The anchor features specially designed curved stainless steel wing tips to allow it to roll to the correct position every time so you don't ever have to worry about its position on the bottom. It comes with a lifetime warranty and has a corrosion-resistant design. It also has a trip line hole for extra hauling. It weighs 32 pounds.

We hope our list of the ten best boat anchors has given you a few great options to choose the next time you need one for your vessel. Overall, our number one recommendation is the Lewmar Claw Anchor because it can handle all kinds of terrain and is great for travelers. For freshwater boating, we recommend you go with the Danielson River PVC Coat Anchor.